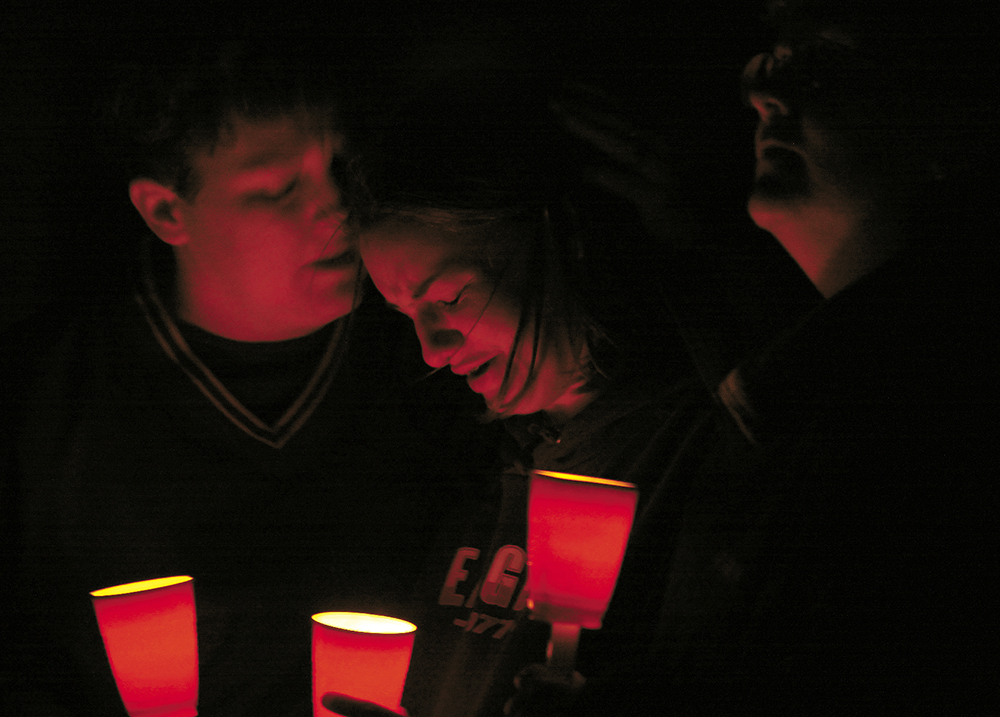 Billie Cochran, right, listens to a speaker as Dawn Gatlin, left, comforts her 14-year-old daughter Sydney at a candlelight vigil for 9/11 victims. Cochran and Gatlin, sisters, have a cousin who works for the Federal Bureau of Investigation Evidence Recovery Team in Washington D.C. He was late to work Tuesday morning beccuse he was at the Washington-Dulles Airport dropping off his parents after a visit. “We waited for four hours before we knew if they were okay,” Gatlin said. Apparently the Martins took the American flight right after flight 77, which crashed into the Pentagon building. They were at the vigil to show thier thanks that thier family was unhurt by the teriosits attacks Tuesday. 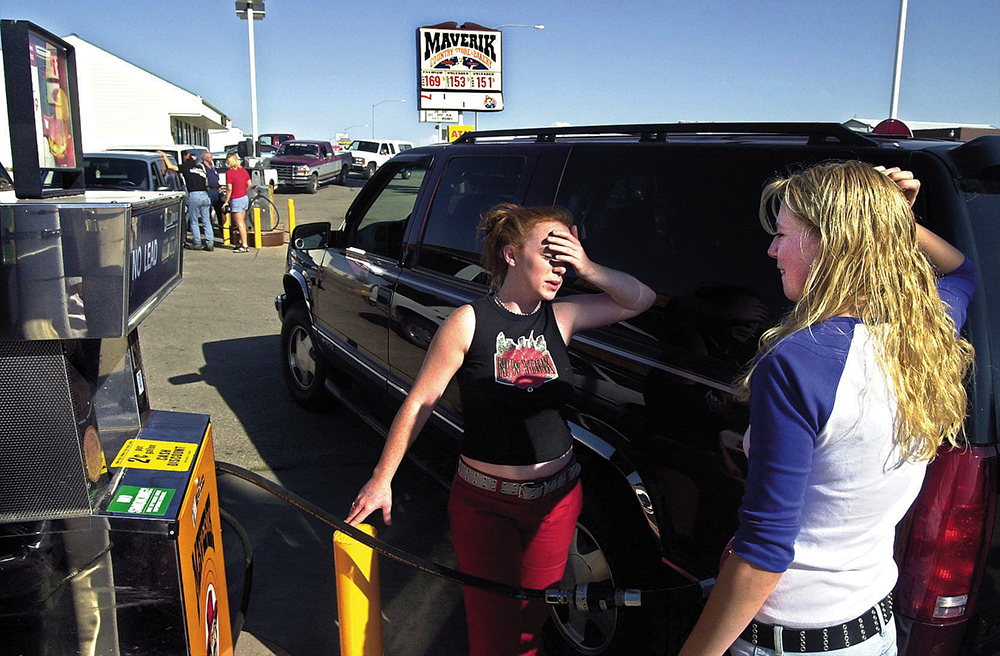 Being stuck in Wyoming during the 9/11, there was not much excitement, or reason to care. Wyoming is worlds away from the lifestyle and happenings of New York and Washington DC.

So all we could get was local reaction, like these two young women reacting to the new gas prices after the 9/11 terrorist attacks.

Prices rose to $1.51 per gallon for unleaded, up about 30 cents from the previous day. Later the store owners, who are responsible for setting the prices, were charged with price gouging by Wyoming state officials. 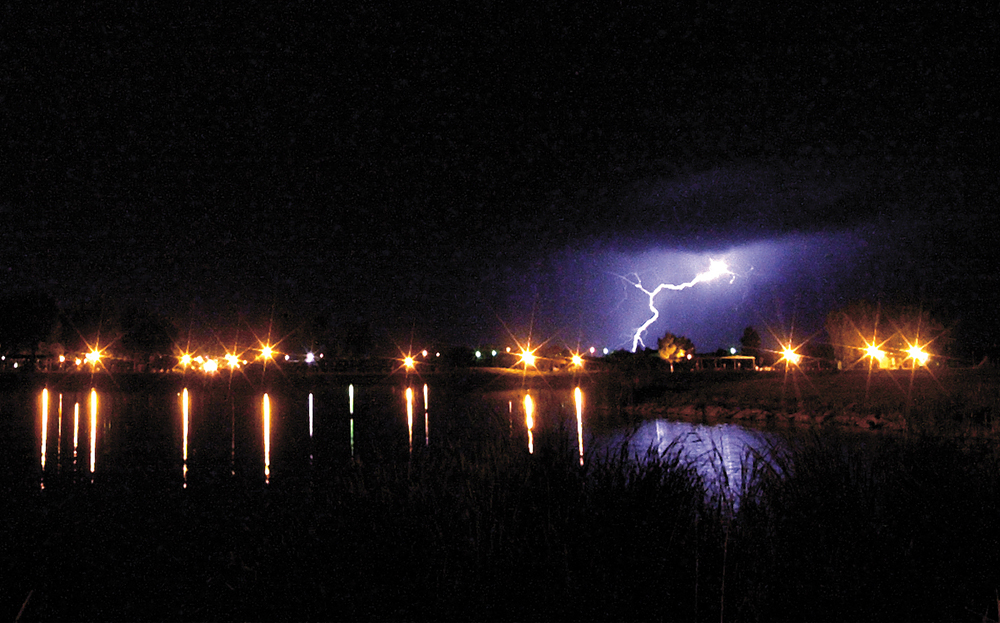 I’ve always been drawn to this photo for the simplicity of the image.
This little 5-year-old boy is so happy and oblivious to my presence. 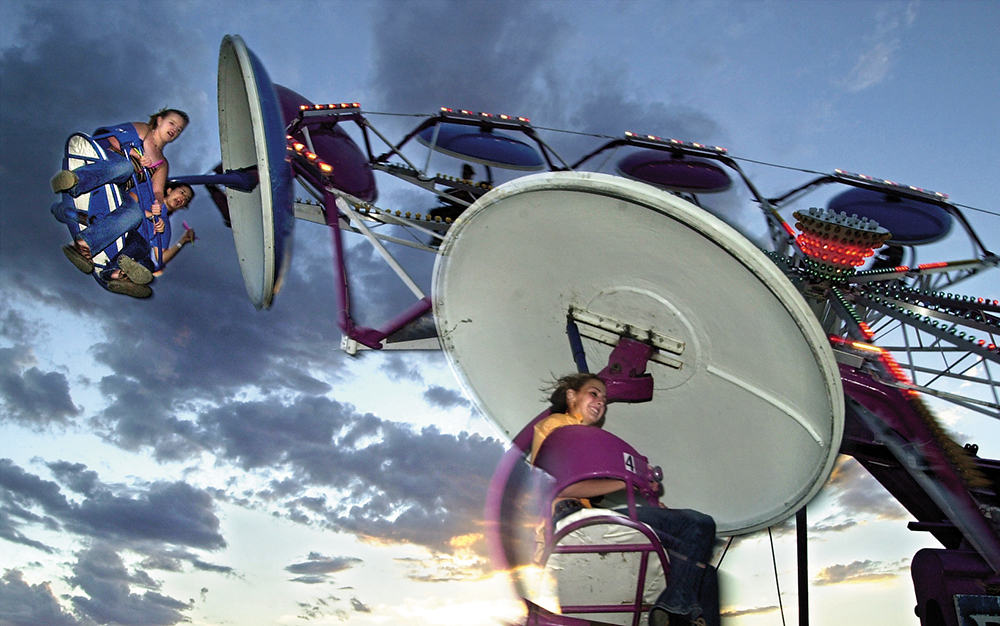 Nothing like a carnival ride to get relief from the August heat. 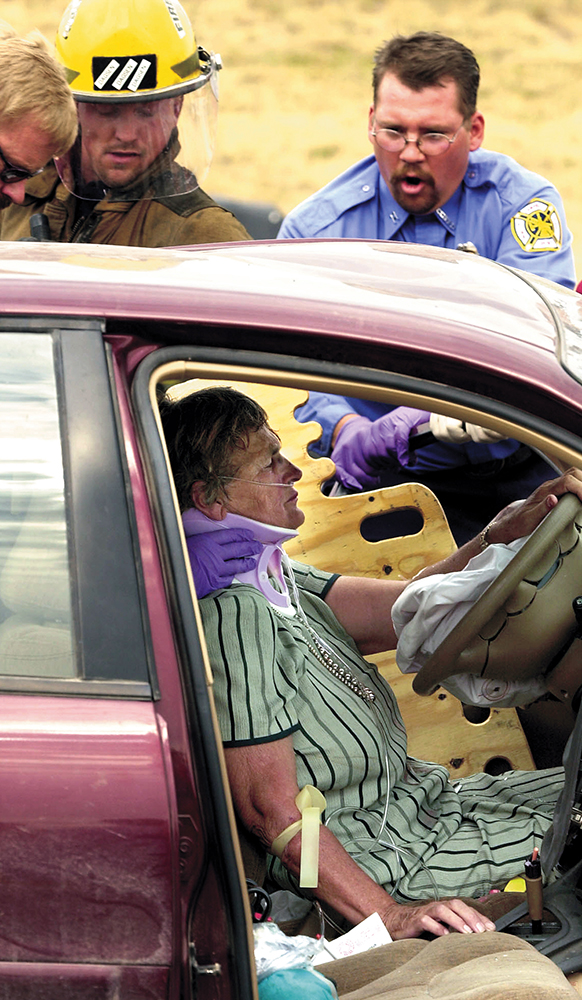 This is another photo that used to be in my portfolio. I think the photo speaks for itself . . . nothing else to say. 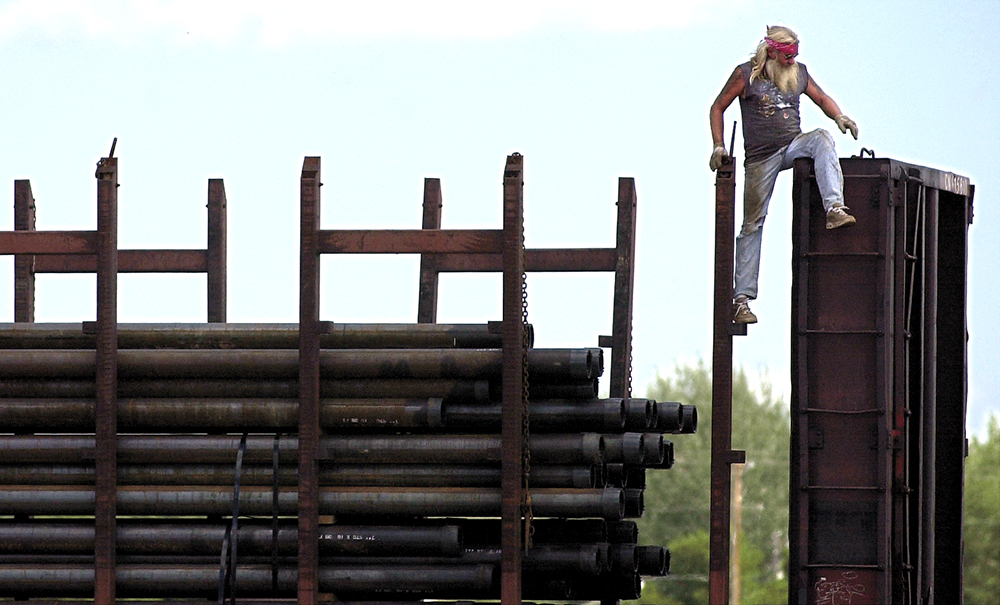 More eye candy…. This man gets a better view while unloading pipes off of a railroad car. 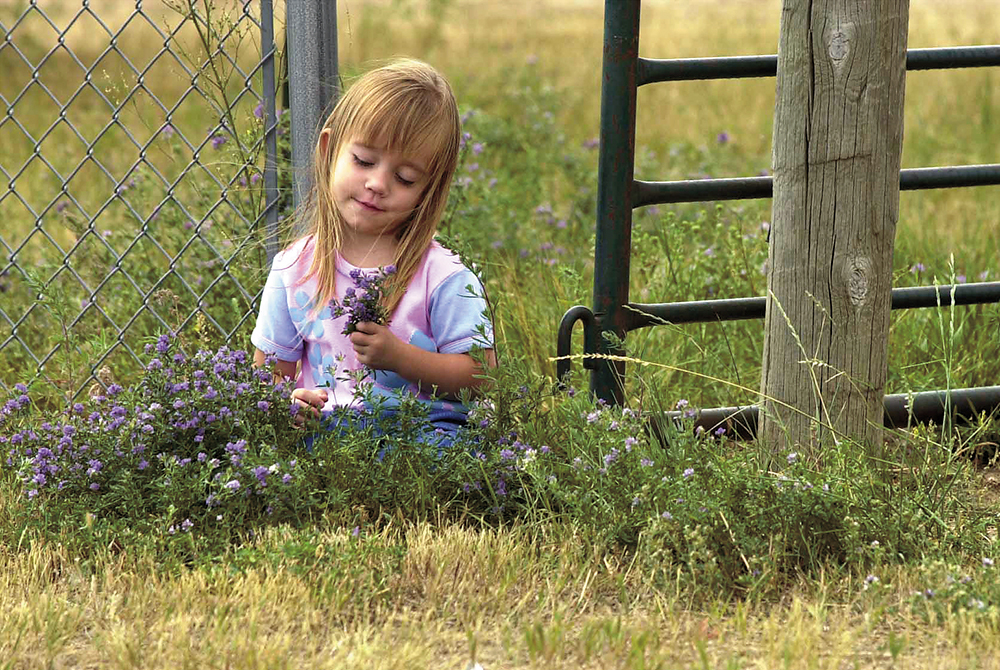 Again, looking for art for the paper. Found this little 3-year-old girl having the best time picking wildflowers.

This is the famous Devil’s Tower on my first of many visits to this enchanting place. It was late and the summer sun was setting on it’s massive columns.

Geologists think the tower is a volcanic plug or the neck of an extinct volcano that has long ago eroded away. It is sacred to all of the plains Indian tribes. Most tribes call it Bear Rock. The Sioux traditionally held their sacred Sun Dance at Devils Tower around the summer solstice.

Each tribe had their own stories about the creation of the tower. My favorite is told by Lame Deer, a Lakota holy man, in 1969. It goes:

“Well, long, long ago, two young Indian boys found themselves lost in the prairie. You know how it is. They had played shinny ball and whacked it a few hundred yards out of the village. And then they had shot their bows still farther out into the sagebrush. And then they had heard a small animal make a noise and had gone to investigate. They had come to a stream with many colorful pebbles and followed that for a while. They had come to a hill and wanted to see what was on the other side. On the other side they saw a herd of antelope and, of course, had to track them for a while. When they got hungry and thought it was time to go home, the two boys found that they didn’t know where they were. They started off in the direction where they thought their village was, but only got farther and farther away from it. At last they curled up beneath a tree and went to sleep.

They got up the next morning and walked some more, still headed the wrong way. They ate some wild berries and dug up wild turnips, found some chokecherries, and drank water from streams. For three days they walked toward the west. They were footsore, but they survived. oh how they wished that their parents, or aunts and uncles, or elder brothers and sisters would find them. But nobody did.
On the fourth day the boys suddenly had a feeling that they were being followed. They looked around and in the distance saw Mato, the bear. This was no ordinary bear, but a giant grizzly so huge that the boys would make only a small mouthful for him, but he had smelled the boys and wanted that mouthful. He kept coming close, and the earth trembled as he gathered speed.

The boys started running, looking for a place to hide, but here was no such place and the grizzly was much, much faster than they. They stumbled, and the bear was almost upon them. They could see his red, wide-open jaws full of enormous, wicked teeth. They could smell his hot evil breath. The boys were old enough to have learned to pray, and the called upon Wakan Tanka, the Creator: “Tunkashila, Grandfather, have pity, save us.”

All at once the earth shook and began to rise. The boys rose with it. Out of the earth came a cone of rock going up, up up until it more than a thousand feet high. And the boys were on top of it. Mato the bear was disappointed to see his meal disappearing into the clouds. Have I said he was a giant bear? This grizzly was so huge that he could almost reach to the top of the rock when he stood on his hind legs. Almost, but not quite. His claws were as large as a tipi’s lodge poles. Frantically Mato dug his claws into the side of the rock, trying to get up, trying to et those boys. As he did so, he made big scratches in the sides of the towering rock. He tried every spot, every side. He scratched up the rock all around, but it was no use. They boys watched him wearing himself out, getting tired, giving up. They finally saw him going away, a huge, growling, grunting mountain of fun disappearing over the horizon.” 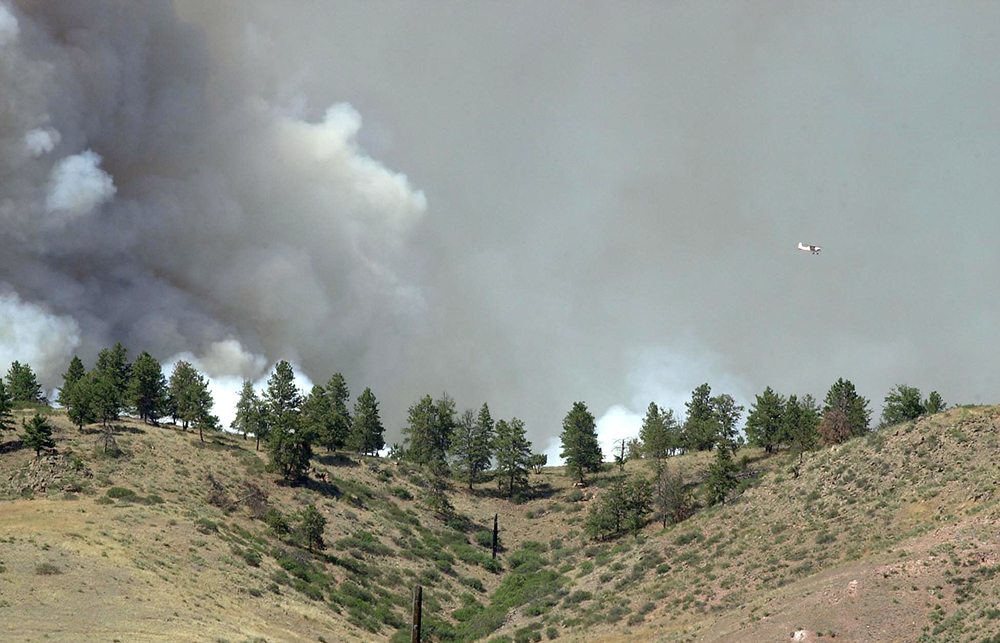 Drove an hour away to cover a massive wildfire raging across the Bighorn Mountain Range north of Sheridan, Wyo., near the Tounge River. 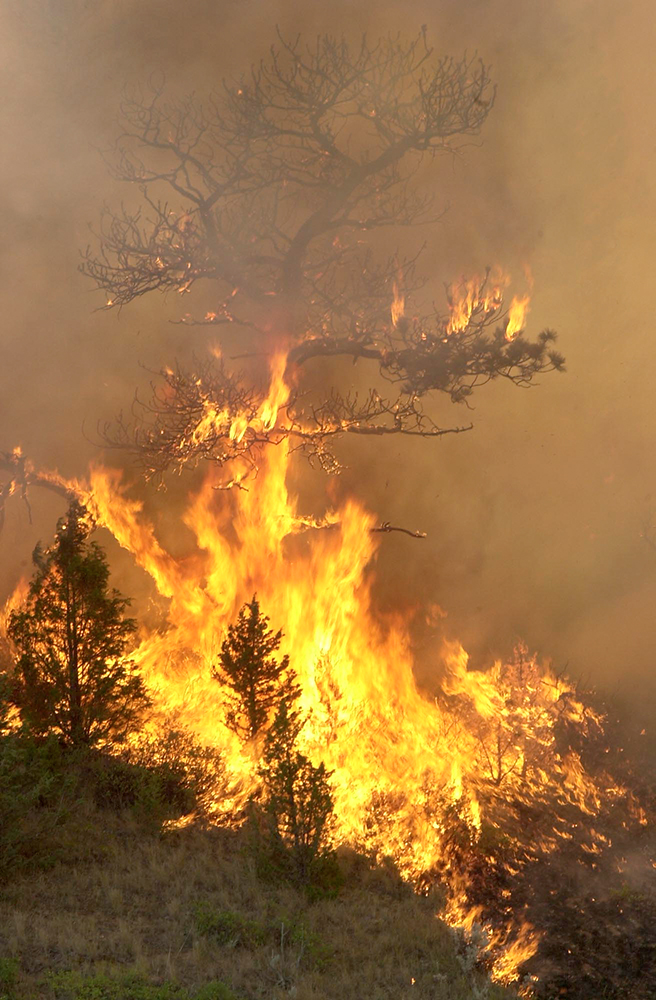