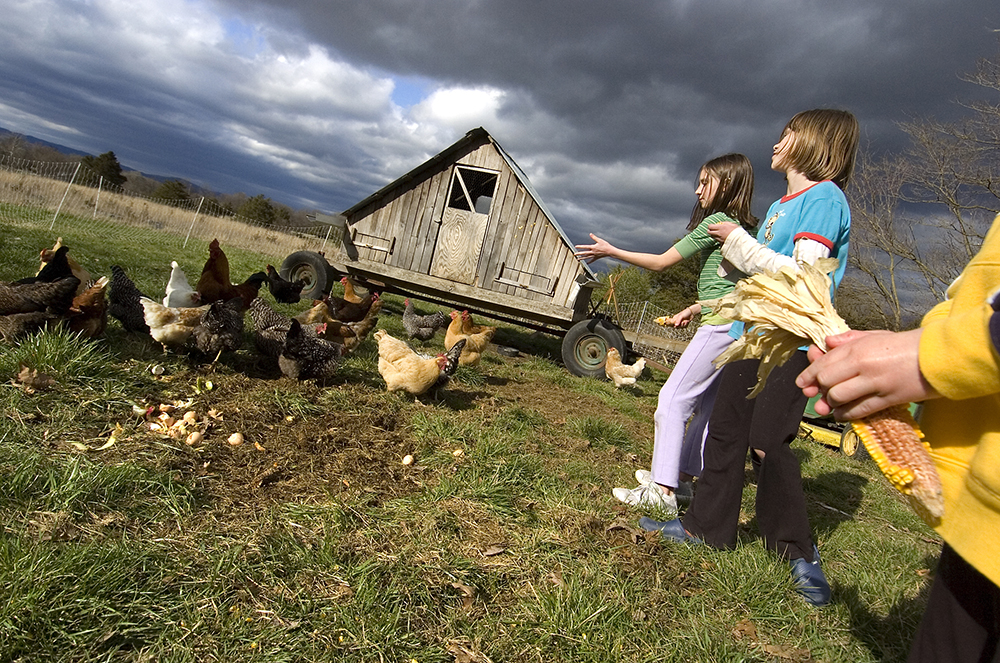 These kids feed their chickens one afternoon. Took this photo for a story about raising your own hens for eggs. 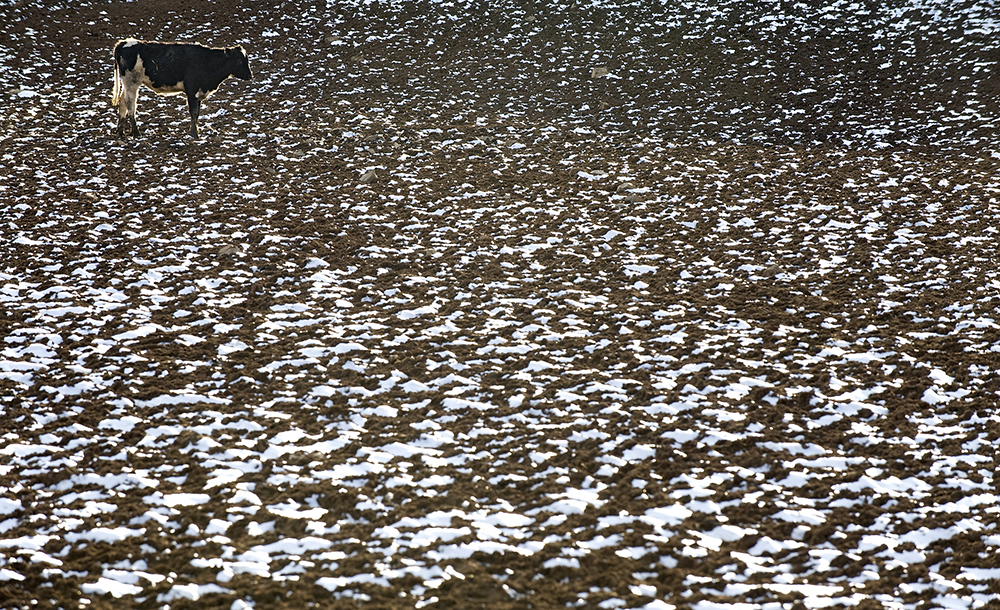 Where’s Waldo, the cow?
A cow in a field with the remnants of the Monday morning snow in Rockingham County.

This is a two-week project I worked on about the Fresh Air Fund. The program offers free summer experiences New York City children from low-income communities. They come by the busloads to the Shenandoah Valley, as many Mennonite farm families open up their homes to these children. I followed Armani Magloire, 11, of Brooklyn, N.Y., when she stayed with the Rhodes family on their dairy farm in Rockingham County. 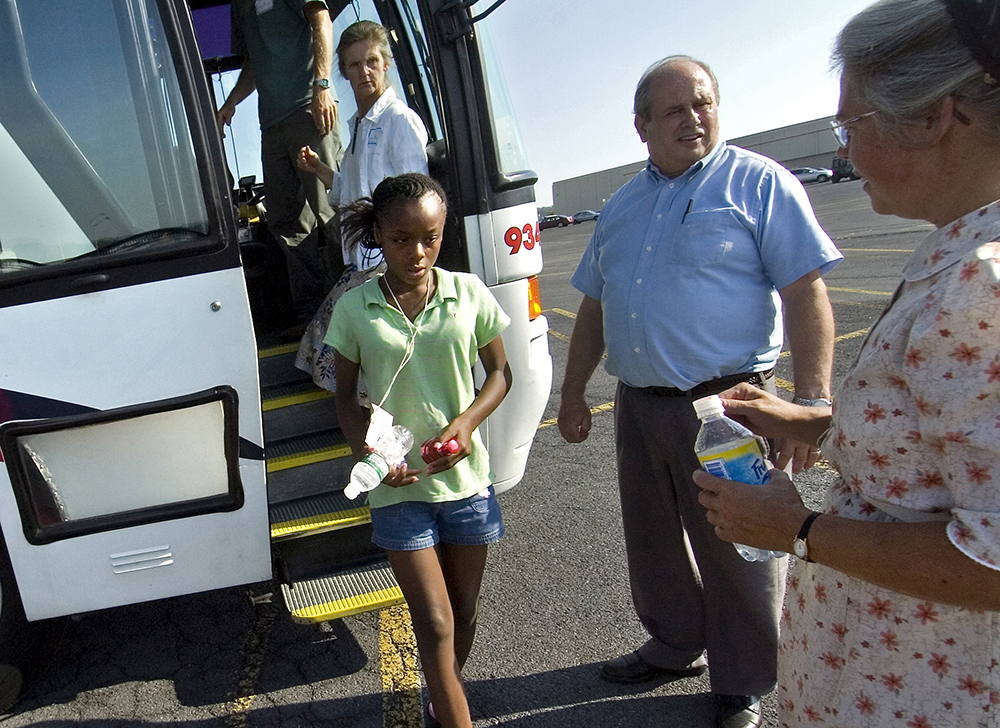 Armani Magloire, 11 of Brooklyn, N.Y., stays with the Rhodes family on their dairy farm with the Fresh Air Fund. 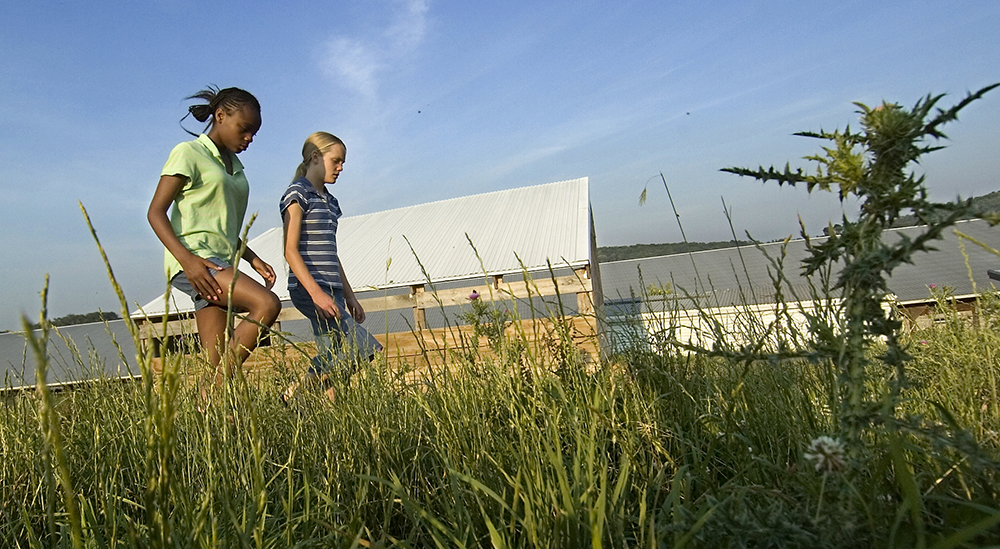 Katrina Rhodes (left), 12, shows Armani around the farm after her arrival Friday evening. Armani saw her first pig, cow and chicken. She learned that bacon, ham and pork chops came from pigs. 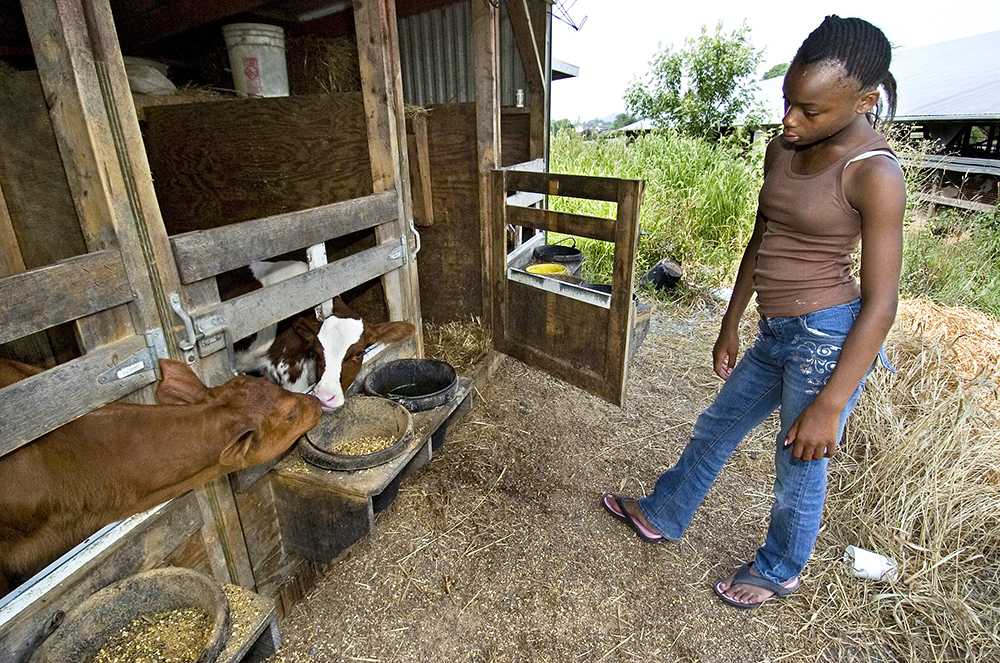 Armani doesn’t know what to think about these baby calves. The Rhodes, who have hosted children for 25 of the 27 years since their marriage in 1981, have 100 cows, three dogs, two pigs, 10 chickens, one house cat and countless wild cats roaming the outbuildings on their dairy farm. 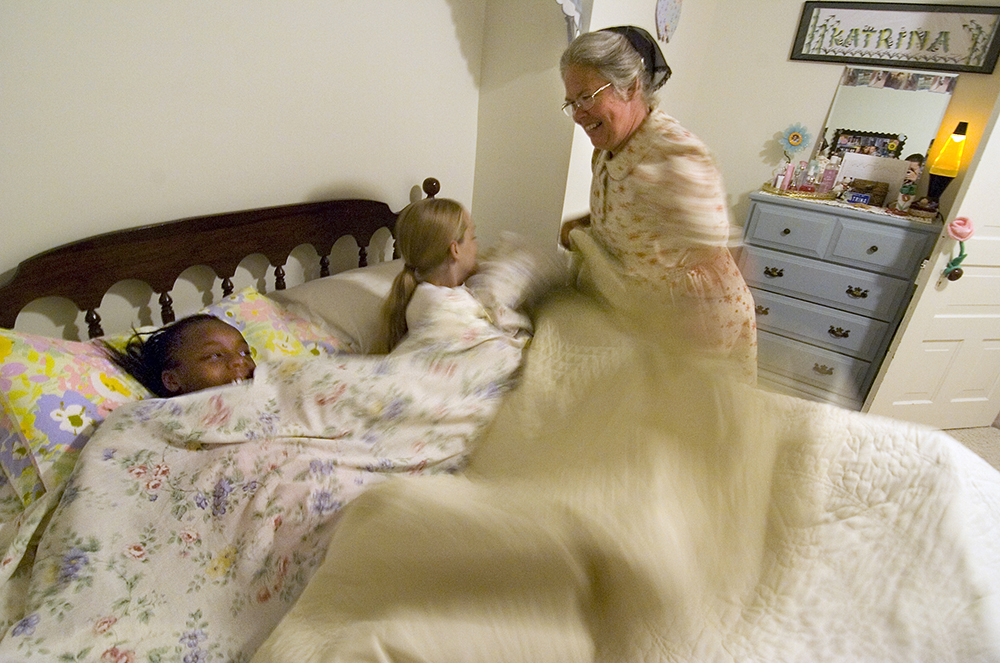 Kathy Rhodes tucks her daughter Katrina and Armani into bed during the first night of her stay. The Rhodes had a spare bedroom for Armani, but she never slept in it. She wanted to sleep with someone since she normally shares the bed with one or two of her eight siblings in her 4-bedroom apartment in Brooklyn. 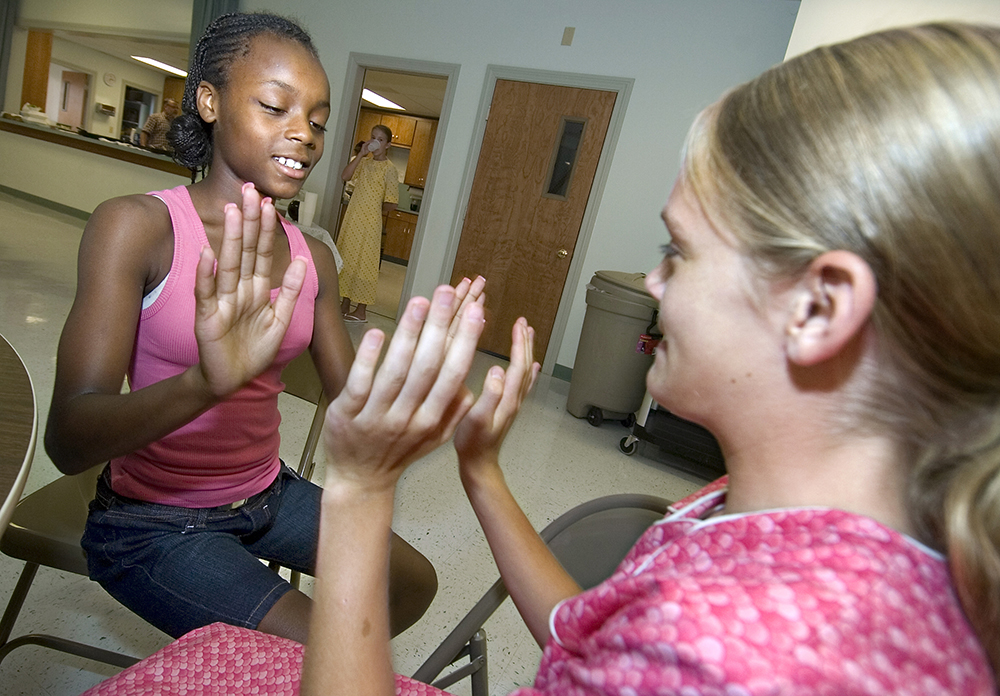 To pass time at a church fundraising event at Dayton Mennonite Church Armani teaches Katrina to play a clapping game that she and her friends play in her home borough of Brooklyn. 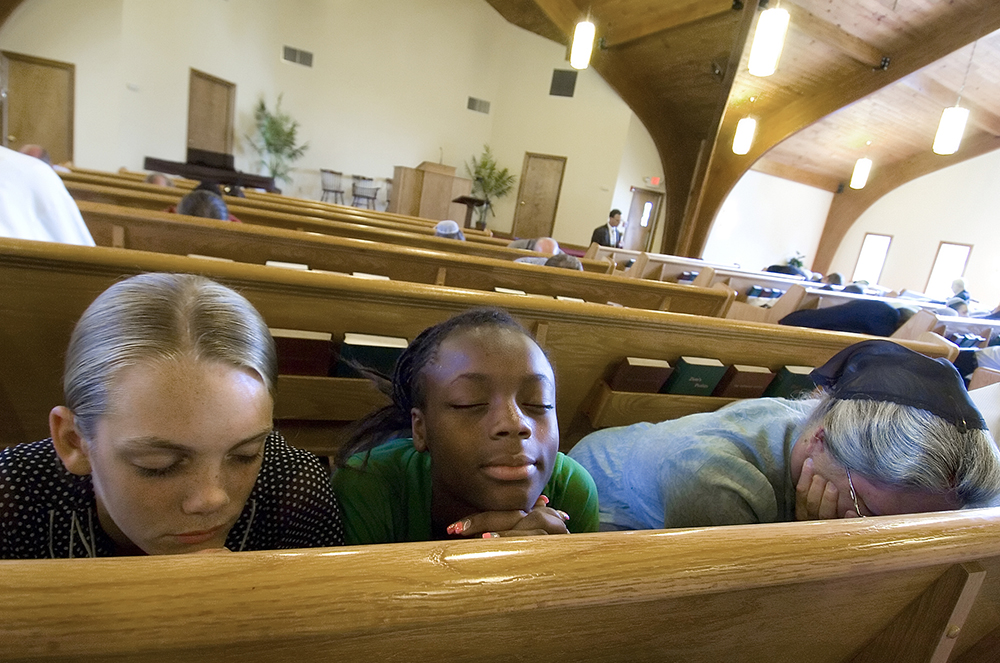 Armani Magloire, 11, (center) prays with her host sister, Katrina, and host-mother Kathy while attending church at the Dayton Mennonite Church. Armani said she didn’t attend church regularly at home, except occasionally with her grandmother. Both Steve and Kathy Rhodes agree that their children and the inner-city children have benefitted from the experience of the Fresh Air Fund. “We’re a Christian Mennonite family who hosts,” said Kathy Rhodes, “And we can form a relationship with a child from a different cultural and ethnic background that is life-long . . . I think it’s pretty awesome.” 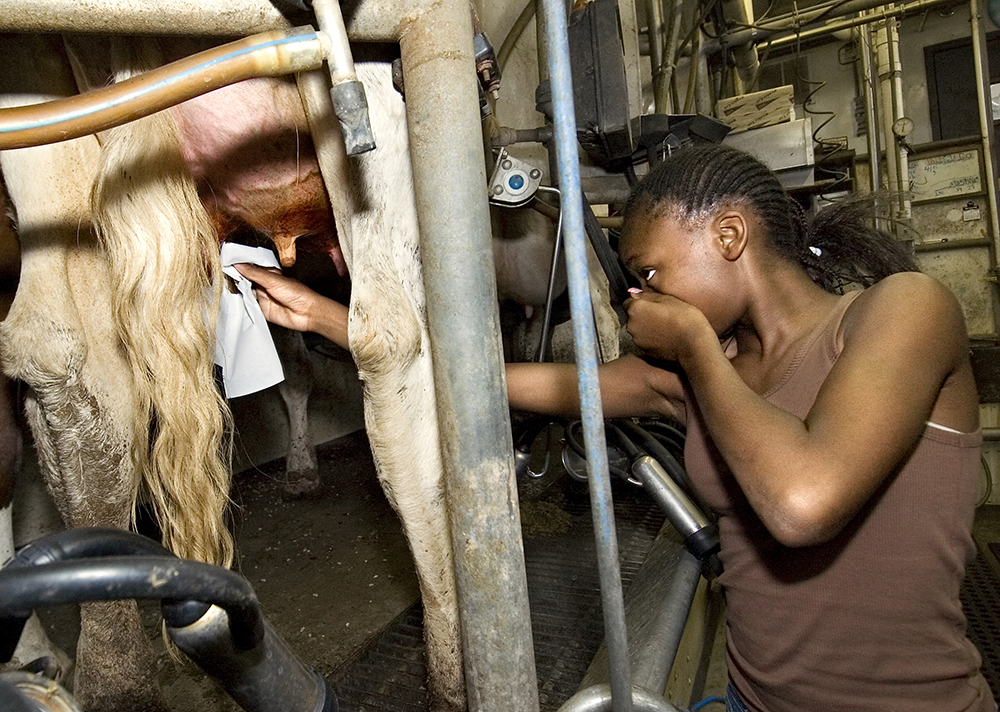 Armani holds her nose while cleaning the utters of one of the cows for milking at the Rhodes’ dairy farm, which is called Staka Holsteins Inc. “She got right in there and wasn’t afraid of the cows,” said Steve Rhodes. 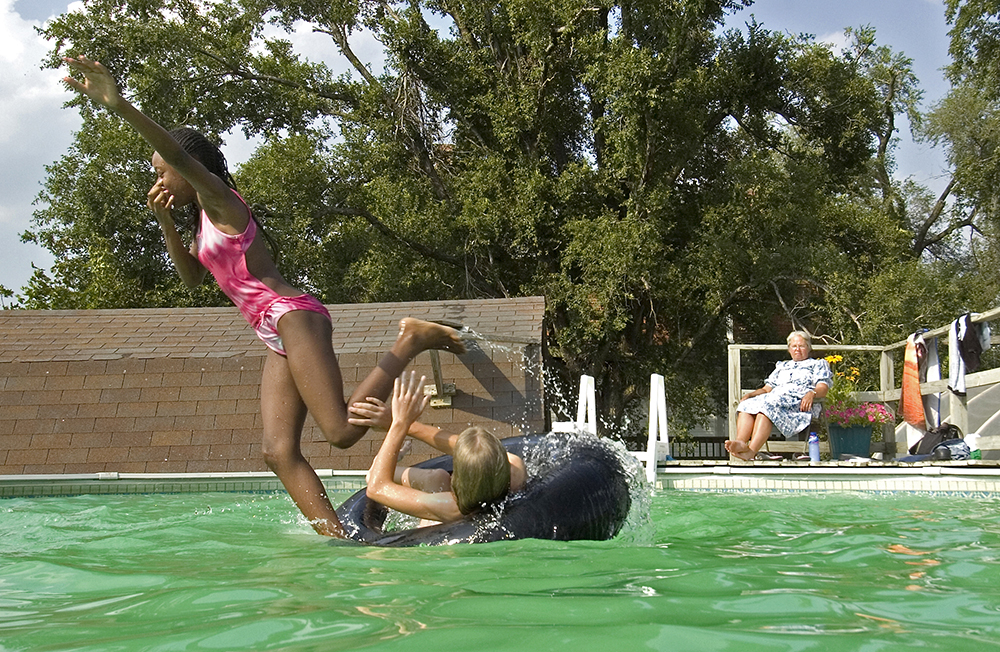 Armani and Katrina swim at a family friend’s pool as Kathy watches one hot summer afternoon. This luxury is something that Armani has the chance to do at home during the summer at one of her neighborhood pools in Brooklyn. 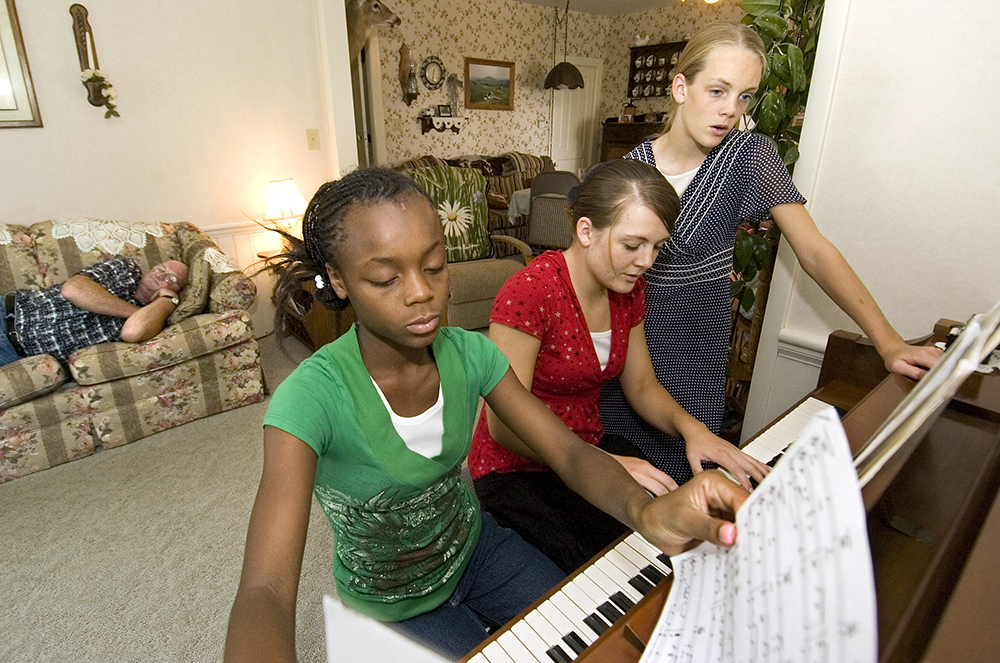 Armani learns some of the music that Jessie, 17, (center) and Katrina can play on the piano before Sunday dinner as host-father Steve Rhodes rests on the couch before lunch. 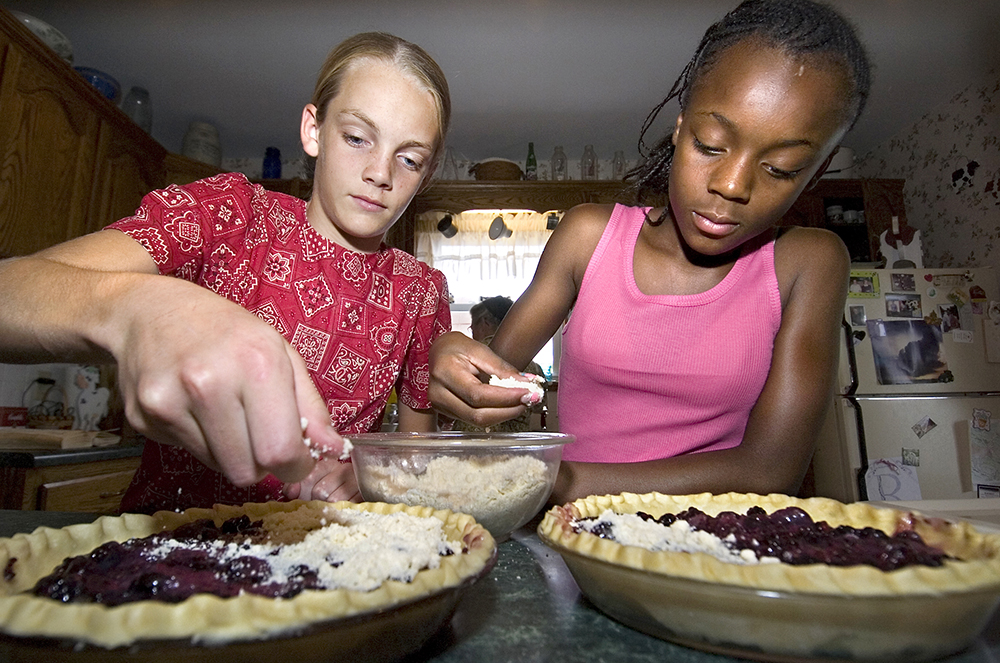 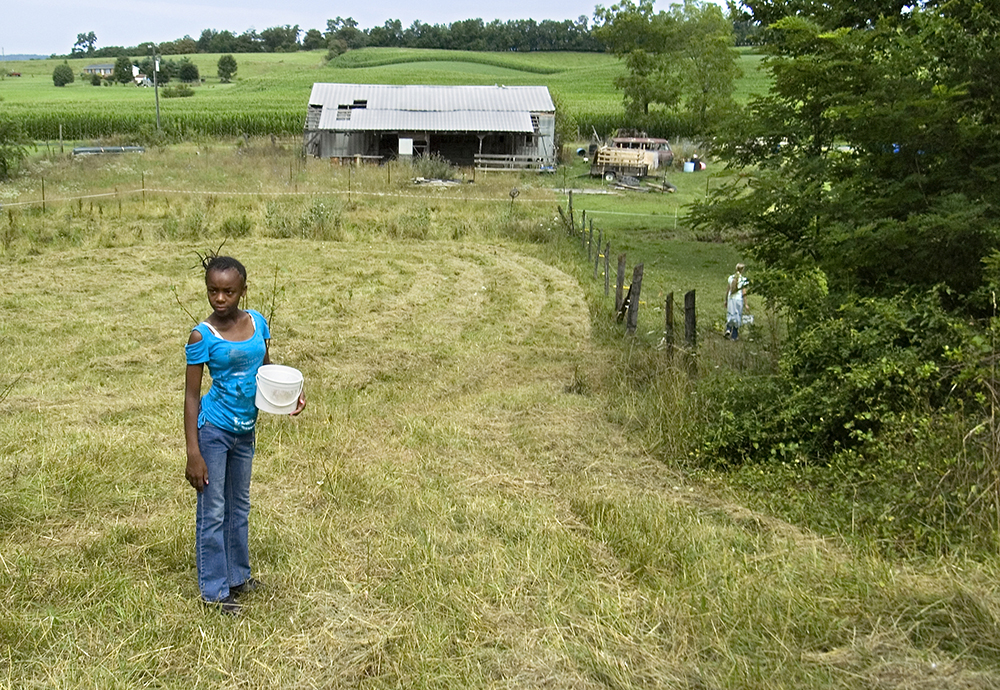 Armani pauses to wait for her host-father, Steve Rhodes, while picking blackberries on a neighbor’s farm. 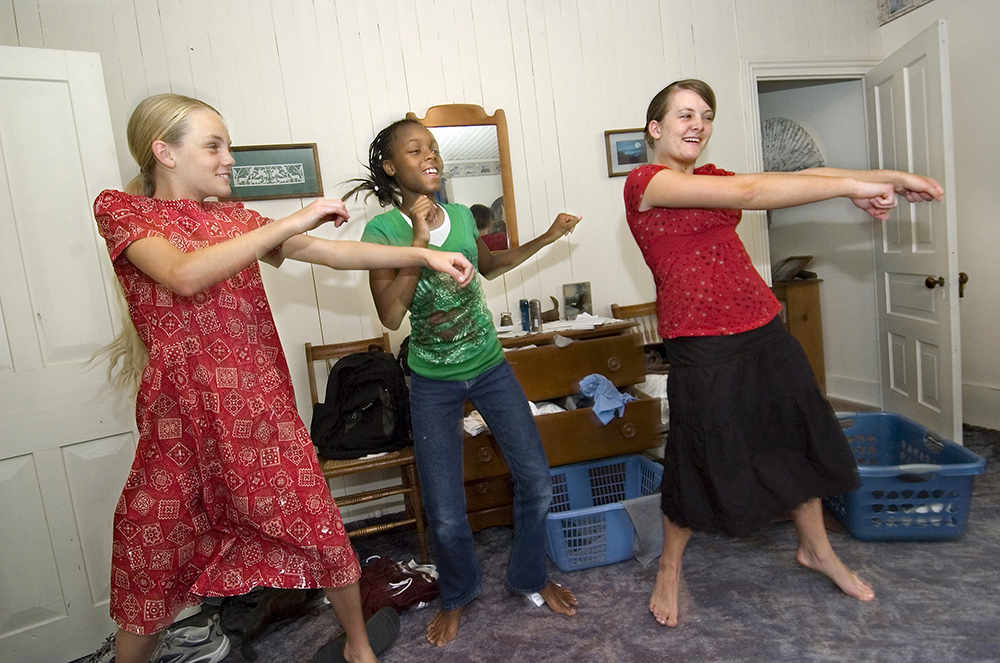 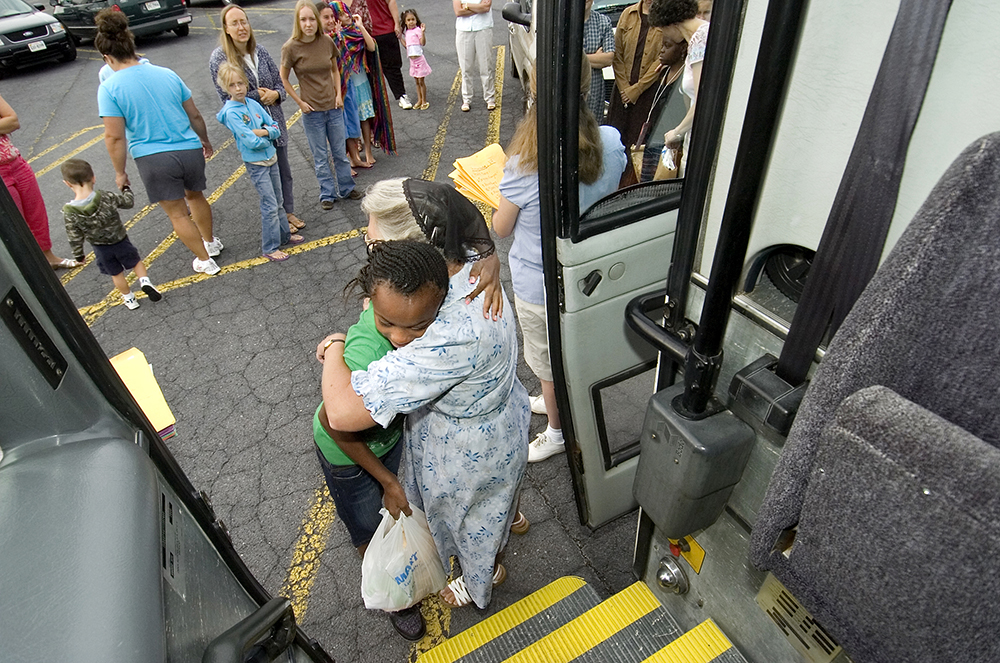 Armani Magloire, 11 of Brooklyn, N.Y., stays with the Rhodes family on their dairy farm with the Fresh Air Fund.
Kathy Rhodes and Armani Magloire embrace in a goodbye after her 10-day stay on the farm. “I had fun,” Armani said, “I’m coming back next year.”

“We don’t have all the answers,” said Kathy Rhodes. “But I hope somehow we can help a child realize there’s more to life than what they know in the city.”

The sun sets over an irrigated corn field near Weyers Cave. 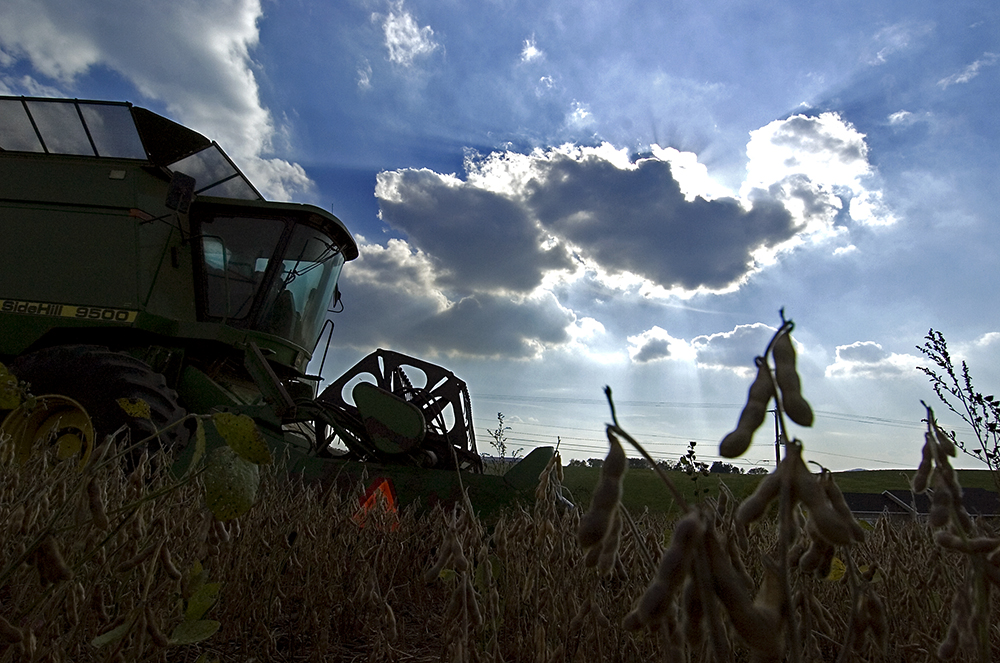 A sexy photo of a farmer harvesting soybeans for a story on late harvest. 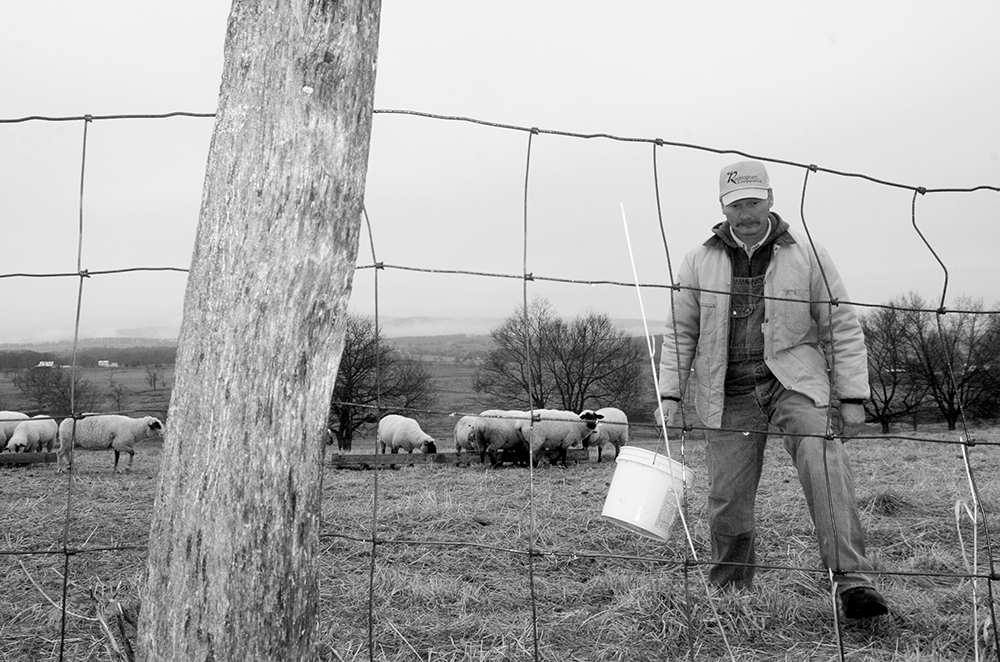 A farmer feeds his sheep herd that are protected by a tight-knit fence to keep out coyotes. 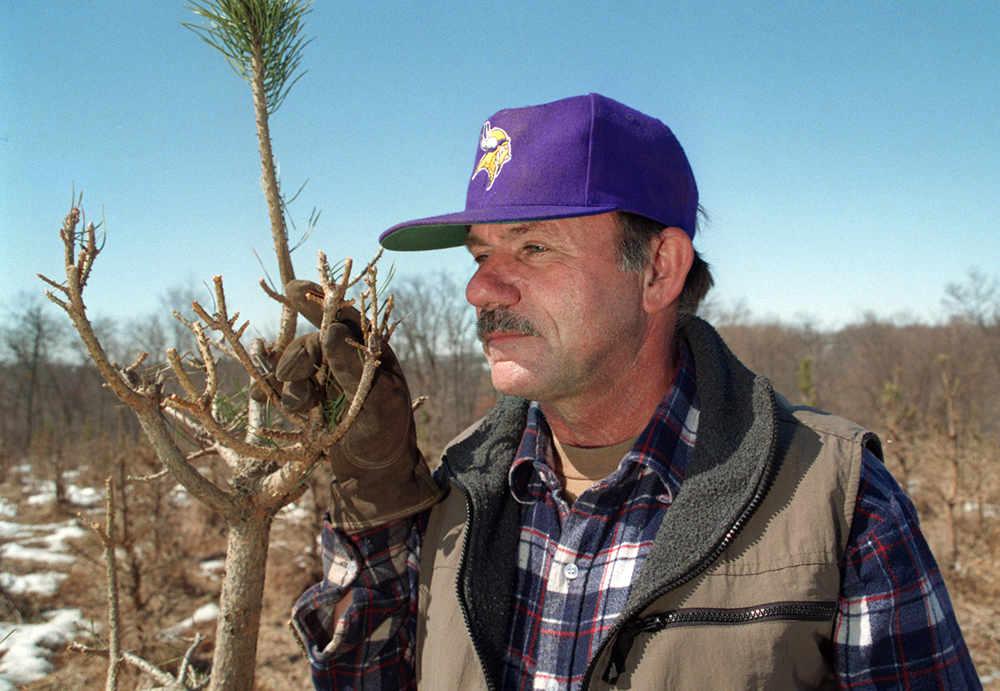 Dave Marx stands in his Christmas tree field, or what’s left of it, after starving deer nibbled-to-death his trees. 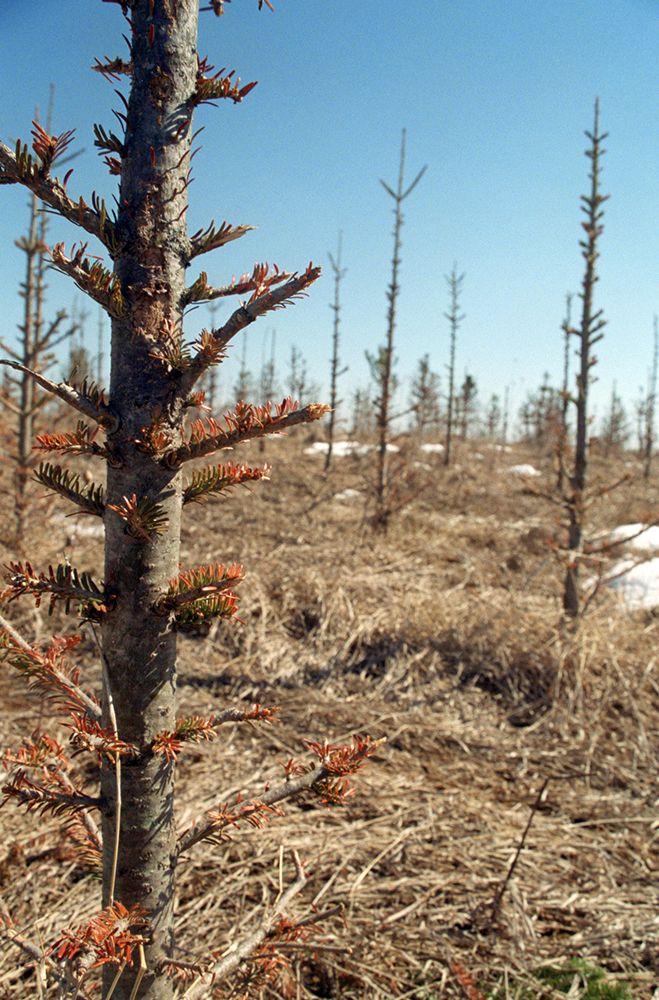 The skeltons of dying trees are all that’s left of a Christmas tree farm near Marquette after starving deer ate the trees’ needles and branches. 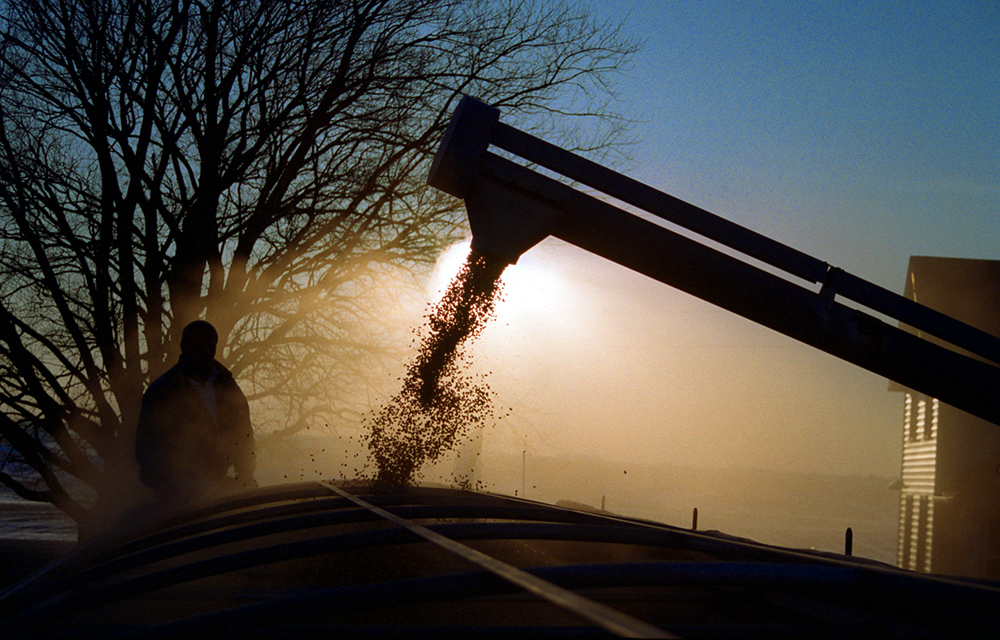 The staple of the midwest: corn. This farmer fills up a truck to sell for cattle feed in the winter.