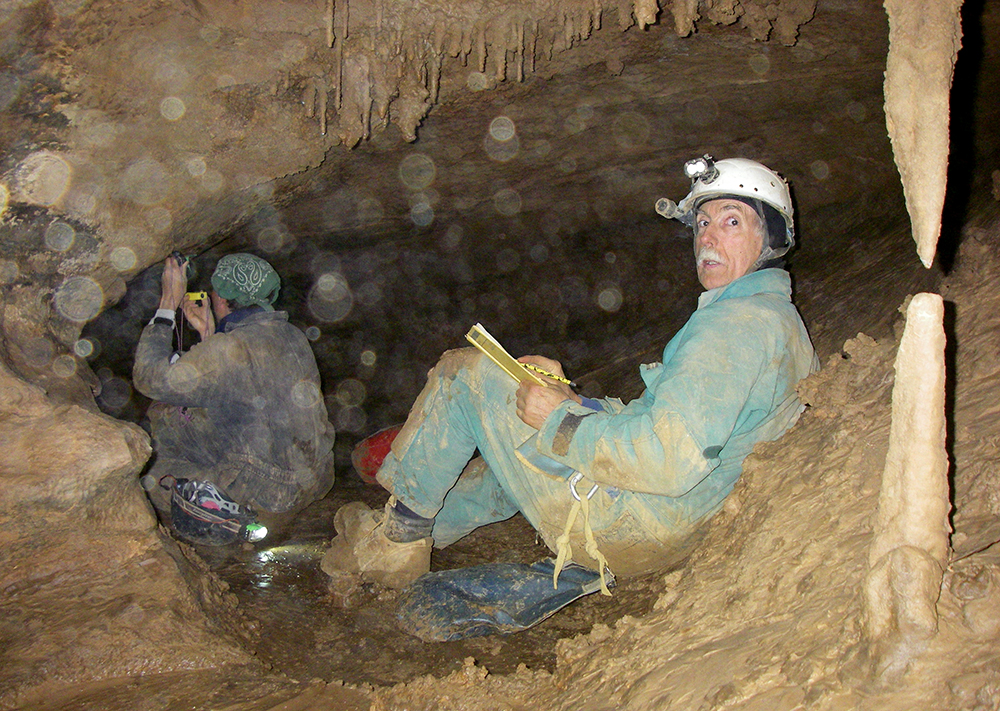 Chris Coates and I arrived at the Gateway for breakfast with a newcomer to the valley, Brian Young. Brian, a recent graduate from JMU, had never project caved. We met up with Terry McClanathan, our fourth in the team, at the fieldhouse. We went to the parking area where Terry got his usual head start into the cave. The rest of us followed, a little after 10 a.m. We got a little backed up in the Puppet Buster and again at the connection climb, but made it to our main lead in Ripple Way a little over 3.5 hours.

The first thing I noticed on our way in was the silence in the passage, which was loud last month with the rushing of tiny streams in Ripple Way. I was planning on refilling my bottle during the day and was beginning to become concerned with the lack of running water. Even near station LAK37, where Aaron and Terry refilled at the waterhole last month, it was dry.

Nonetheless, our first objective was to check the water level at the sump (LAK54). It was just as full, if not more. Which perplexed me since the water levels in the passage were obviously lower this month. We then traveled back to our first juicy lead: a northeast passage downhill at LAK47. Chris was on backsight again, Brian was on frontsight, Terry was sketching cross sections and book and I was concentrating on the main sketching. It took several shots before Brian got the hang of it, but once he did, we were good to go.

We made our way down the sandy hill, and then upwards again. It was small passage, we were sitting down most of the time. Between LAL5 and LAL6, we figured out that we were below the two small holes in floor at LAK41. “Rats!” I said, having two fun leads taken off the list to push in the future. Further up the passage we ran into a small standing pool of water (LAL9) with some nice formations. The passage went to a crawl through some sloppy mud and then we popped out into the Ripple Way! We tied in LAL11 into LAK39. In our 300-foot loop in a lower level, we had managed to take off three promising leads.

We then decided to go back and survey near the waterhole area. I was out of water, so while the others were eating lunch, I pushed my way through a small crack (going northwest) filled with tiny, grabby popcorn towards the sound of running water. I found a nice room with a 3-foot-deep pool being fed by a gush of water coming down a well. The water continued east down a small passage.

Upon my return, we packed up and started our second part of the survey for the day (LA12) from station LAK36. We followed a high crawling lead going north off the Ripple Way. It was there that Terry said to Brian, “Just be a man and shoot it,” after Brian complained about something. It was hilarious! After we proceeded forward in the passage, it quickly became apparent, with all the holes in the floor, that we were above the waterhole. We were about 20 feet above the floor. The area was covered in slick mud and several rocks fell below as we passed through the upper level. After three stations we were on the other side (LAL15), back safe and sound on solid floor.

We followed the passage, which was trending upwards, past a nice flowstone area with a large column (LAL16) and into a room (LAL 17). From here the passage turned southwest, following a floor channel with running water. This passage must have been gushing last month, to offer up a nice place to refill water down at the watering hole. Around station LAL21 the passage ceiling was getting higher, like a little canyon. At LAL23 we popped into a nice cobbled room. I’m just going to refer to this room as the Cobble Room. We shot down a smaller passage, which dead ended (LAL24). To the east, we could see another upper level continuing to go. This would require a short bolt climb, as it was only about 20 feet above the floor. We left another lead, it was at the top of the Cobble Room, going west. It appeared to have a lot of breakdown in the crawl. We then traveled back to the waterhole and surveyed the lower level, tying it into LAK37 and LAL14 above.

We made our way out of the cave, with Terry leading the way. It took us a little over 4 hours to exit the cave. We changed in the rainy night and made our way back to the fieldhouse for some food and sleep. And yes, we did turn in a waiver, Miles. I believe that Brian had a great time and will return to the Valley. 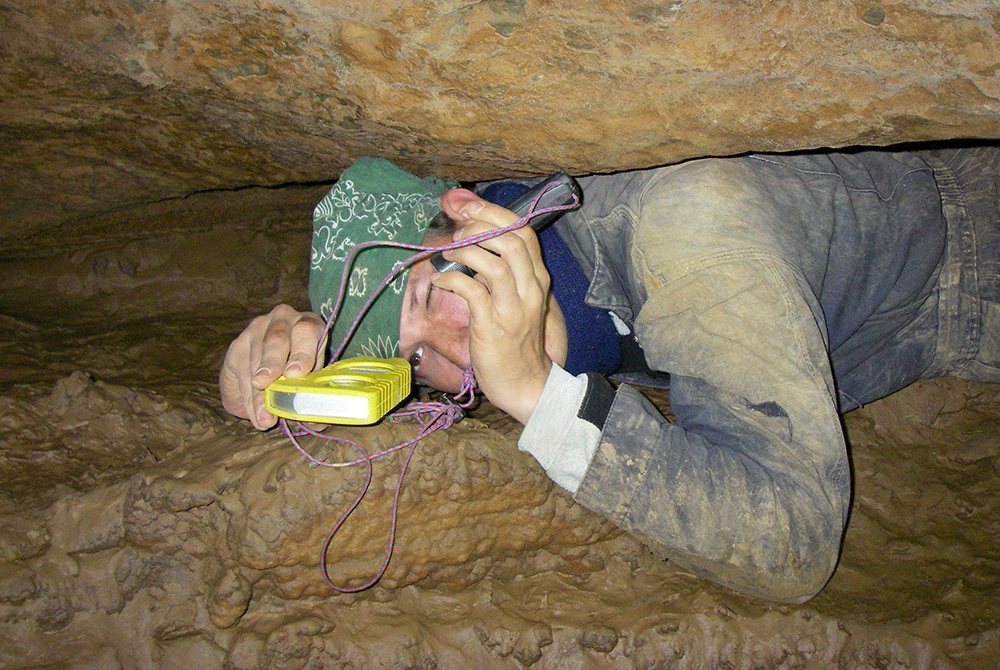 Here Brian Young reads instruments while taking a shot during the survey.