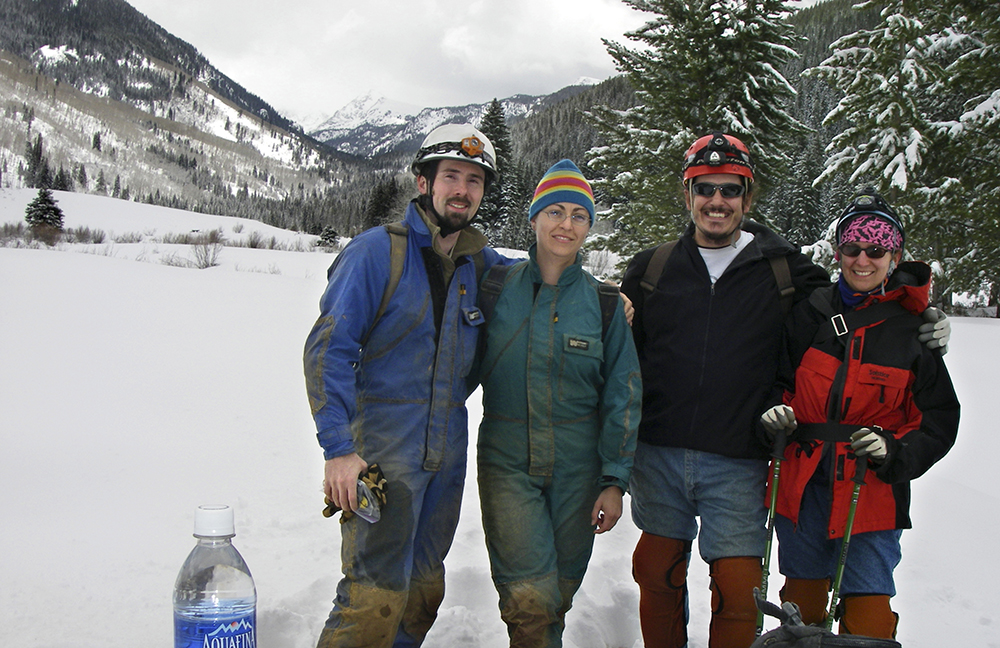 Our crew for Fulford Cave — with Ken and Tracy Headrick.

I was fortunate to find Colorado caver Ken Headrick on the new NSS “CaveSpace.” As a native, Ken was very knowledgeable of the alpine caves in Colorado. He and his wife, Tracy, took us into a popular cave in the White River National Forest called Fulford Cave. We drove to the area the night before and awoke to a snow storm in the morning. We meet Ken and Tracy that morning and drove out to the cave. The snow prevented us from driving to the normal parking area below the cave. So we had to hike two miles up the mountain from 9,000 feet to 10,000 feet to Fulford entrance in knee-deep snow. Ken took the lead, breaking the trail in the snow. The view of the valley was amazing and so beautiful blanked with alpine trees in snow.

Once we hiked to the entrance, we found the culvert leading into the cave was buried in snow on the side of the mountain. Someone left a little backpacking “pooper scooper” nearby and we used that to clear the entrance. Supposedly, the snow was covering about 20 feet of the culvert. Once we made our way down, the entrance room was colder than it was outside! We went past several ice formations and columns in the entrance section and finally made it into the main part of the cave where it was warmer.

Ken took us on several loops in Fulford, one of which had a room called Moonmilk Corridor. In this passage, both walls, about 25 feet tall, were covered in moonmilk. Water was actually dripping out of the milk, which acted like a sponge holding the water. Generally the cave looked much like what were used to seeing in the East. The passages had breakdown, squeezes, exposure, a stream, stalagmites and other formations.

There was very little vandalism in the cave, which is surprising because of the traffic it gets from spelunkers. Most of the formations within reach were damaged, but there was little graffiti or carbide burns on the walls. If this cave were in TAG, Bobby Joe would mark his e-mail address in pink spray paint all over the cave.

We spent about three hours underground and left for our hike down the mountain to our car. We decided to go sled ridding without a sled down the steep 100-foot embankment near the cave entrance. Woo-hoo! 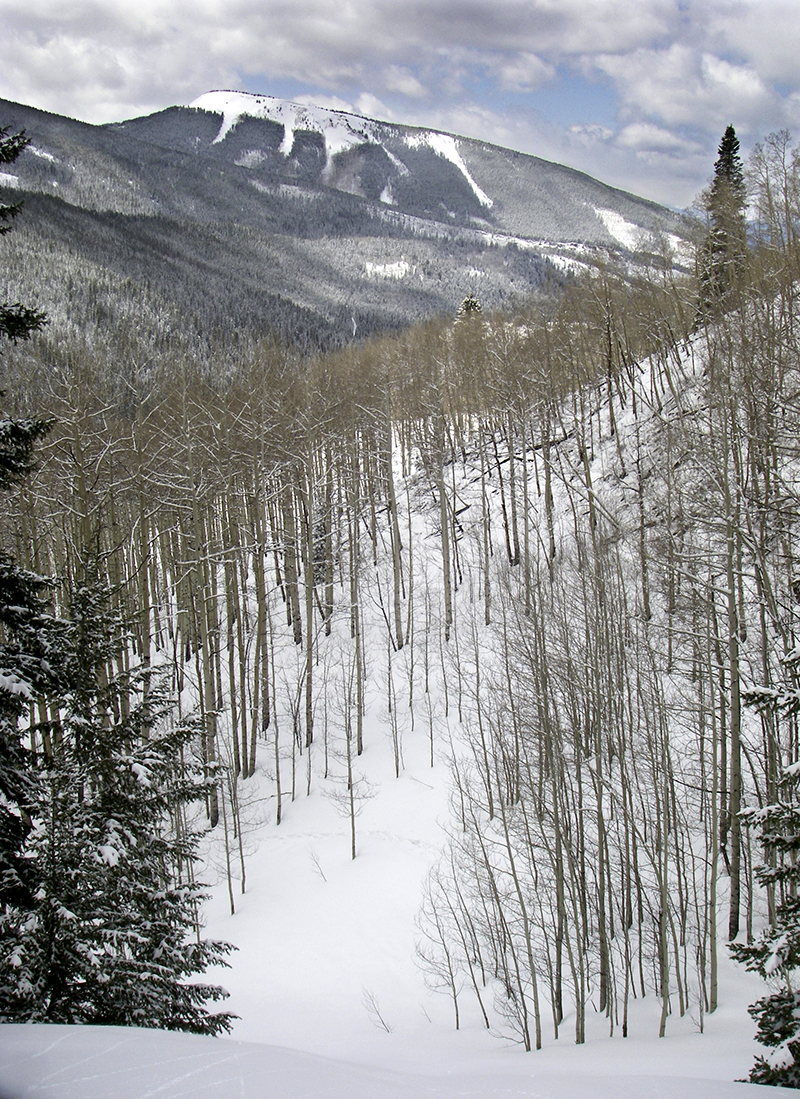 The view of the mountain across the valley after our 1,000-foot elevation gain hike. 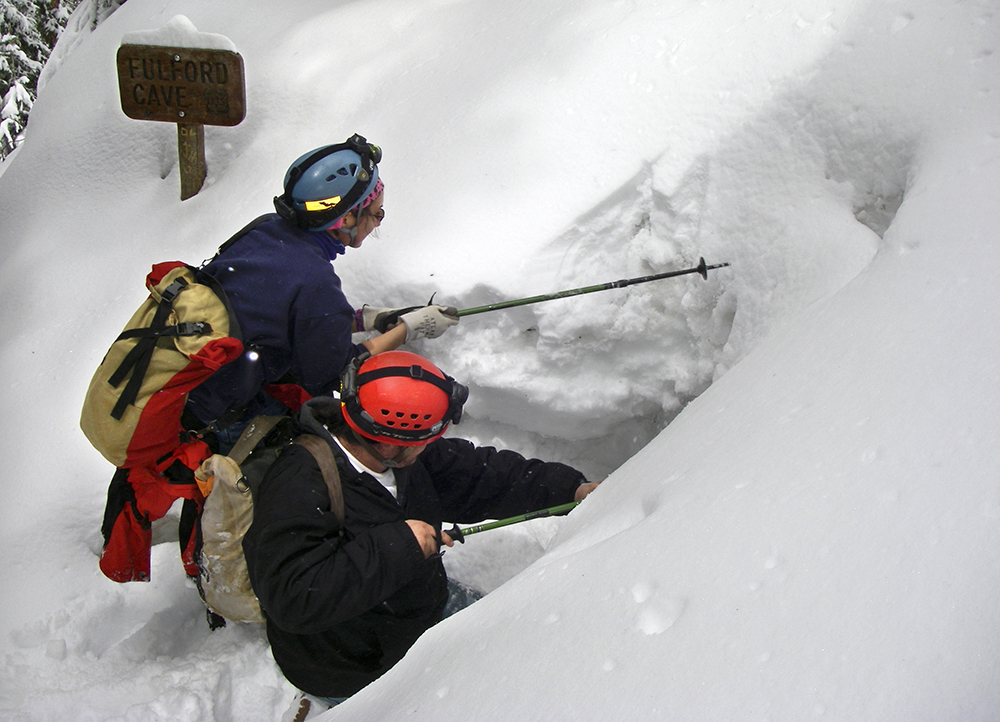 Digging out the cave entrance. 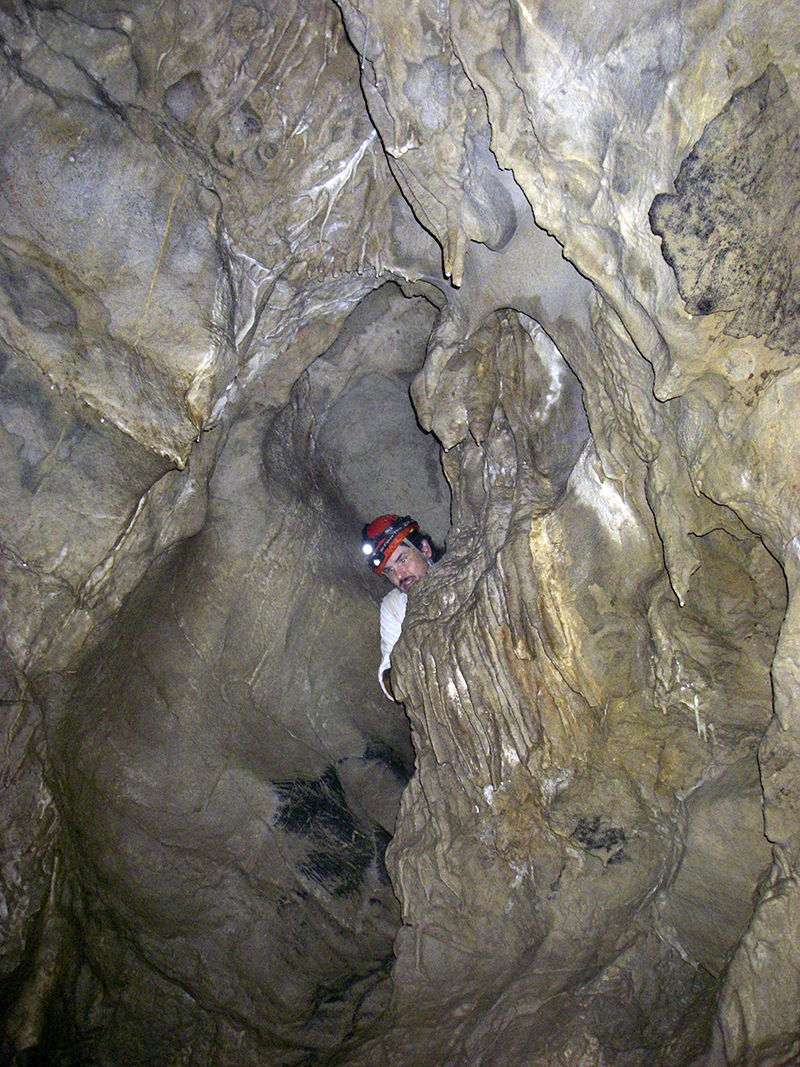 Ken peaks down from a ledge. 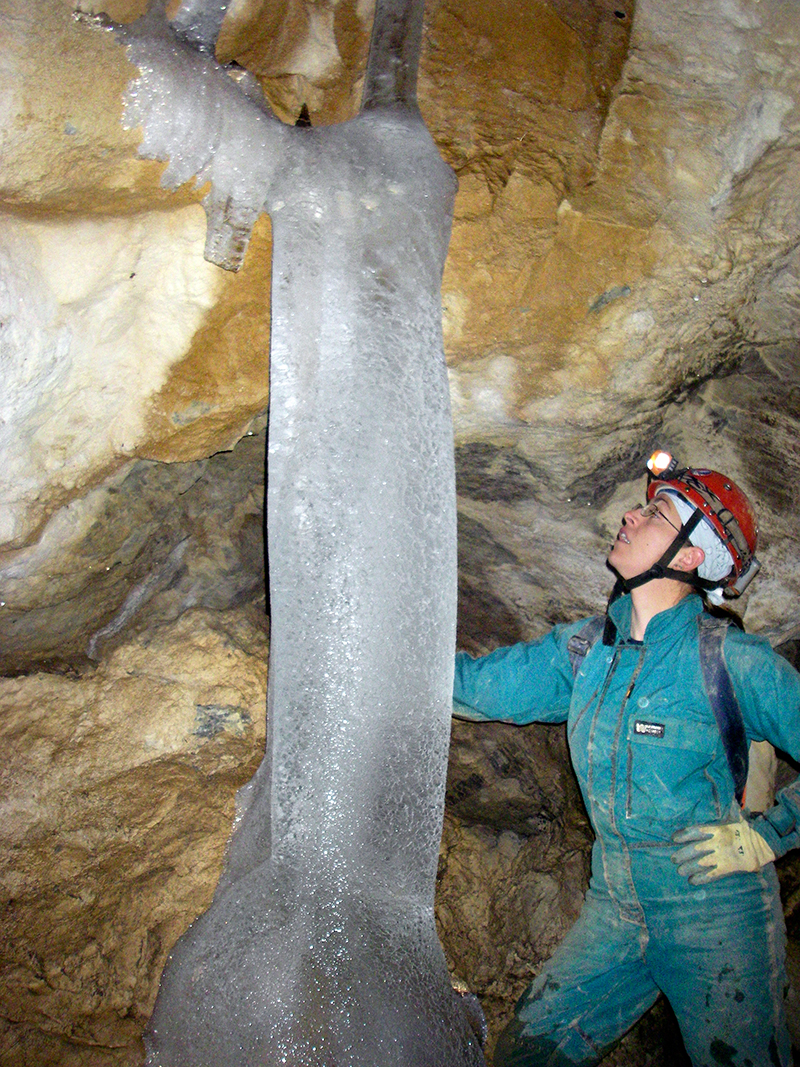 The ice formations in the entrance area were huge. 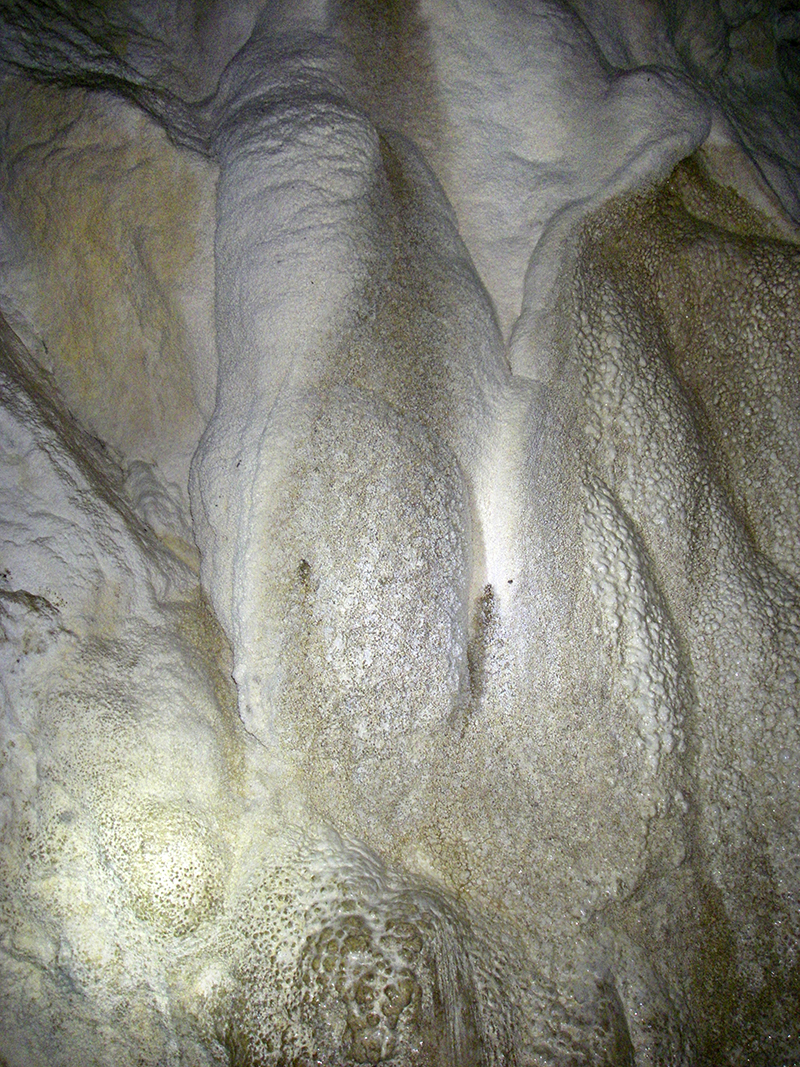 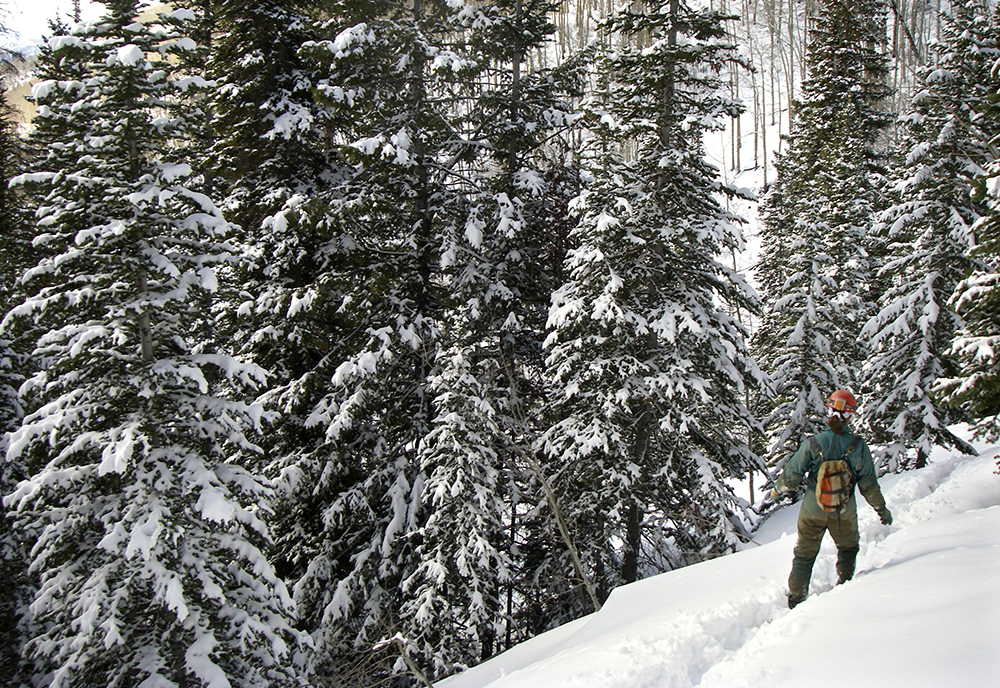 Walking back after caving. 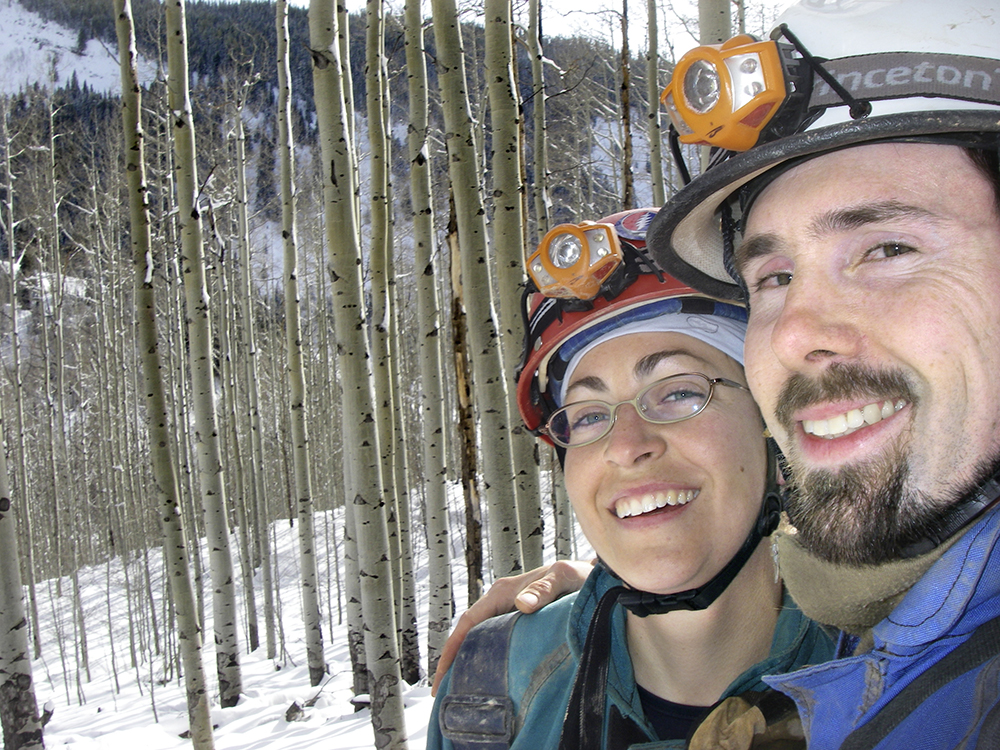 In the alpine grove. 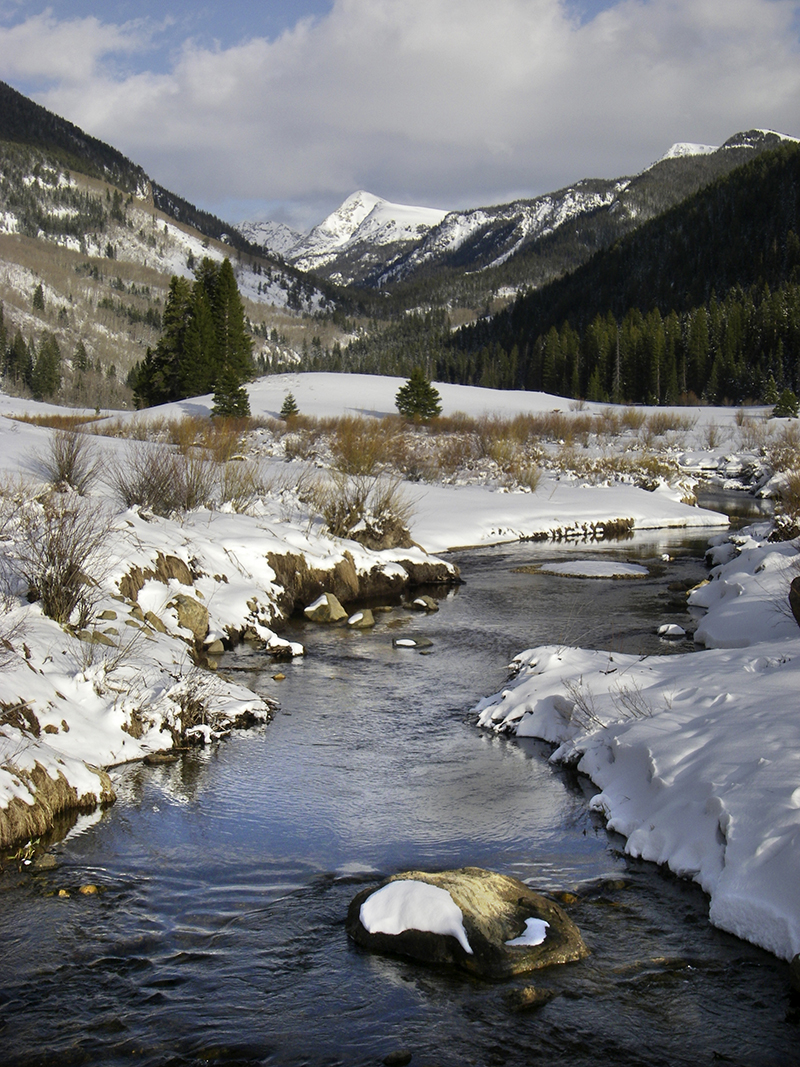 And the beautiful valley seen from our parking spot.